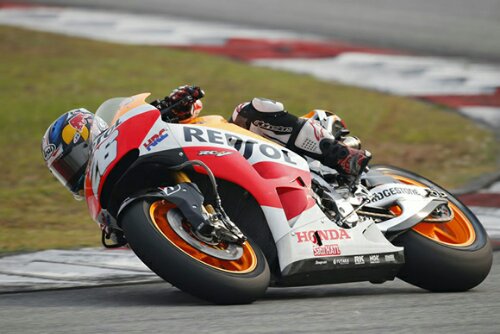 Mazbro n mbaksis, this is the latest news from the MotoGP Repsol Honda Team (taken from motogp.com news) which once again had a sponsorship with PT. Astra HondaMotor Indonesia. As we knew, in 2013 the sponsorship has been dropped after a succesfull 2011 and 2012 with the famous Satu HATI-One HEART tagline on the RCV’s bikes.

In an effort to inspire young Indonesian riders to achieve their highest racing dreams, PT Astra Honda Motor (AHM) have partnered up with the Honda factory racing team, Repsol Honda.The One HEART and Satu HATI logos will be displayed on Honda’s RC213V bike (having already featured since the first Sepang test) and also on the leather suits of team riders Marc Marquez – 2013 MotoGP World Champion – and Dani Pedrosa, for the 2014 season.This partnership, which also existed in 2011 and 2012, demonstrates AHM’s commitment to growing grass roots motorsport in Indonesia and supporting the development of young riders on both a national and international level. The training of young riders will be conducted through the Honda Racing School (HRS), using Honda’s sport motorcycle the CB150R StreetFire, meanwhile the development of racing teams will be conducted through Honda Technical Racing Training. Marketing Director of AHM, Margono Tanuwijaya, explained how the company has a huge commitment to support the young generation of riders, to achieve their ultimate dream, through various stages of development at regional, national and international level in Asia and Spain. “In the near future, we expect Indonesia will have heroes competing in World-class racing. May the spirit of Satu HATI, One HEART be in the soul of each step of making these dreams come true, including racing at the highest level”.Attending the announcement in Jakarta, Indonesia, was HRC’s Executive Vice President Shuhei Nakamoto and team rider Dani Pedrosa.  “We are very happy to renew this relationship with Astra Honda and we see their dedication to two-wheel motorsport in the young generation” commented Nakamoto. “We know how popular MotoGP is here in Indonesia and how passionate the fans are for this sport, and this is an important relationship for Honda”. Dani Pedrosa, fresh from the Malaysian MotoGP test, also remarked “I receive many messages of support from my Indonesian fans and we feel your energy! I hope that when you see the One HEART – Satu HATI on our bikes and race suits this season, you feel that we are also supporting you”. Dani’s teammate, Marc Marquez, was unable to attend the event in Jakarta as he’s currently recovering from a pre-season injury but sent a message of support to the team in Indonesia: “I’m sorry I cannot be in Jakarta and have the opportunity to meet all my Indonesian fans. I am working hard to get fully fit with the same spirt as you share, One HEART – Satu HATI! I send my best wishes to all the Indonesian teams and riders for 2014!”. MotoGP fans will be able to see AHM’s tagline during the Phillip Island test next week and then when Marc Marquez and Dani Pedrosa line up for the first time at the Losail International Circuit in Qatar on March 23rd.

O to BORN
The Brixton Housewife